Serving as a District Committee Member strengthens the member's connection to their local A.A. community and introduces them to the broader fellowship of world-wide service.


What is a District Committee Member?


Each D.C.M. represents a sub-district made up of 10 or so groups. D.C.M.s and Alternate D.C.M.s are elected at the District meeting and, ideally, will hold the position for the term of a panel (two years).

As with our personal recovery journey, District 6 D.C.M.s have the flexibility to decide which groups they represent as they form sub-districts, and also discover their own personal way of connecting to those groups.


For more information see the pamphlet Your District Committee Member.


What does a District Committee Member do?


In addition to helping convey the group(s) conscience to General Service Conference, the D.C.M.: 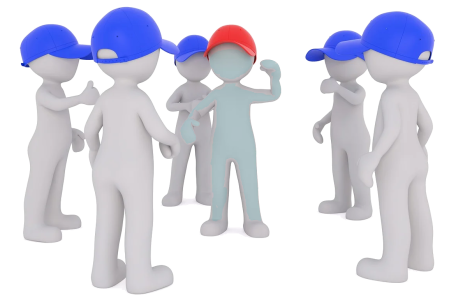 
A service sponsor is an important resource when questions arise. 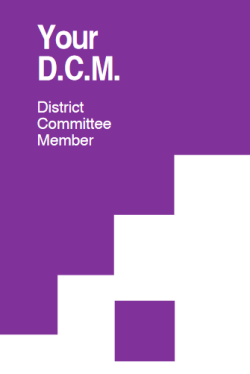 Guidelines for D.C.M.s are included in the following:

Links to additional resources which may be helpful when discussing service opportunities with A.A. Groups. (such as information about General Service Representatives) can be found on the District 6 Website’s A.A. Meeting & Service Resources page.


Intergroups/Central Office resources in Indian River, St. Lucie (serving Okeechobee) and Martin Counties. Often the Intergroup or Central Office is aware of group changes before the D.C.M. Through this communication line we can support cooperation and avoid duplication of effort to maintain our databases.

The District Committee Member (DCM) is an essential link between the group General Service Representative and the Area Delegate to the General Service Conference. Their job is a 2-way street.

In District 6 we have sub divisions in each of our counties within our District. We have a total of five counties that the DCMs serve. These counties are Glades County (Northern section), Indian River County, Martin County, Okeechobee County and St. Lucie County.

DCMs are usually responsible for the right number of groups in terms of the committee members ability to keep in frequent touch with them to learn the problems and to find ways to contribute to their growth well-being. This could be as few as five or as many as 90 groups. Population density and the geographic size of the district will affect the ability of the DCM to communicate with their groups See chapter three in the Service Manual.

The DCMS from each county along with the county DCM coordinator from that county provide a new set of subdivisions at each 2 year rotation with the DCMS assigned to the groups that they prefer to serve. The DCM coordinator will report the names of the DCMs assigned to each sub division to the registrar for the purposes of roll call and identification.

Each county DCM coordinator will have an available copy of the assigned groupings with the assigned DCM so that new GSRs and alternate GSRS will know who the DCM is.

for their group. This person will also provide the overall District DCM Coordinator (Alternate Chairperson) with a copy of the above.

As a member of the District, DCMs are part of the voice of the group’s conscience.

DCMs should try to meet with any new General Service Representatives (GSR) from the groups to which they are assigned prior to their first District meeting. They should also plan on meeting with their GSRS on a regular basis to discuss their collective issues and seek solutions. Either the DCM or GSR can bring the issues to the district meeting for discussion.

The District elects DCMs through the third legacy procedure. If a newly elected DCM is a current GSR, they are required to resign from the group service position. They should encourage the group to elect a new GSR to fill the vacancy. DCMs must be willing and have the time and energy to serve the District to the best of their ability.

The term of the DCM is two years and generally coincides with the South Florida Area election of officers. Elections are held in even years at the November District Meeting with service to begin the following January.

A candidate wishing to serve as DCM will be given the opportunity during the District Business Meeting in November of the even year to state their qualifications. If there is more than one candidate for an office, the voting will be by written ballot. When there is only one candidate, the election will be by a show of hands. The candidate must receive a majority vote.

In the spirit of rotation, no person shall be a candidate for immediate re-election to the same position unless no one else stands for the position and should wait at least one month before re standing. Motion # 594.

DCMs regularly attend all District Meetings and Area Quarterlies/Assemblies. DCMs are defrayed by the District for Quarterly/Assembly attendance and participation as per District resolution.

The DCM should report to the area quarterly business meeting at 8:45 am to be included in the in the count for voting at the area.

DCMs occasionally attend meetings and group conscience/business meetings of the groups they serve.

When requested by the district chairperson the DCM presents an oral report of no more than 4 minutes, to the district, about the activity going on in their groups. They provide their written report to the recording secretary for inclusion in the monthly business minutes.

When requested by the district chairperson the DCM or a Committee Chairperson will serve to present an orientation to the new GSRs.

DCMs explain the importance and significance of service work, answer questions, provide information, promote the 7th Tradition and our self support efforts, and assist the GSR wherever possible. They ensure the GSRs are acquainted with all GSO Guidelines and Conference approved service material including but not limited to those listed under GSR Responsibilities and Duties."

DCMs help GSRs make informative and interesting reports to their groups and encourage them to bring new members to service events.

DCMs bring Traditions problems to the attention of the District Chairperson.

DCMs make a regular practice of talking to groups about the opportunities and responsibilities of General Service work.

The DCM will deliver contribution letters to their groups when provided by the Area and District Treasurer.

This page is all of the general guidelines that the committee chairpersons have in common. This page will be in the legacy of service once only and the succeeding pages will be the selective scope/procedures for each chairperson position.

The qualifications for chairperson for these committees, per resolution (# 517 02/2014). Individuals must have a minimum of two years of continuous sobriety and one year as a past or present General Service Representative GSR) in any of our ninety three (93) areas within the United States and Canada. An alternate chairperson be appointed as a member of all the District 6 standing committees. The chairperson of these committees will appoint this person pe resolution (# 603 07/2019). The alternate chairperson must meet the same requirements set by resolution as standing district committee chairpersons and be defrayed at the rate set by resolution for attending area quarterly assemblies in the absence of the committee chairperson unless otherwise defrayed. The term of the DCM is two years and generally coincides with the South Florida Area election of officers. Elections are held in even years at the November District Meeting with service to begin the following January.

There will be no waived requirements/qualifications for any of the district officers, committee chairpersons, DCMs and ACMs

These two items will be the responsibility of the current serving chairperson for evaluating the committee's business and functioning for the two year panel of service. This reflects the overall duties and activities of each service entity in District 6, Area 15. All of the currently serving District 6 Officers, Committee Chairpersons and the overall DCM Coordinator (alternate district 6 chairperson)

The committee holds a scheduled meeting, when necessary for members. Most communication and work distribution is done via computer

The Chairperson, or Alternate Chairperson in their stead, attends the quarterly Area 15 committee meeting and the Area Assembly.

Receives defrayed funding, from the district treasurer, for the cost of attending the Area 15 quarterly weekends. This is usually one nights lodging at the agreed quarterly room rate. Or may receive defrayment to and from the quarterly, if they have not stayed overnight as above, at the current IRS reimbursement on mileage

Expenses incurred performing duties of this office must be submitted to the Treasurer, including items, which, you, individually, are absorbing as a contribution. These must be itemized to enable annual budgeting for the district as a whole.

All voting members of district 6, plus the chairperson (a non voter, who casts a vote only in the event to break a tie) have a right to put forth a motion to the body

All District 6 officers, and committee chairpersons will provide, at the October business meeting during their report time, a description of what their position is and what has been done in the past two years This will give anybody a general idea of what each position entails in a general preview of the job description so as to let those interested make an informed decision about standing for the positions